Posted on September 29, 2013 by bergholtbrown 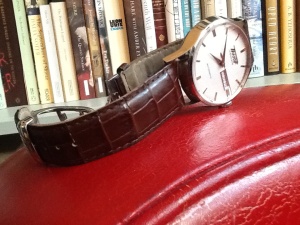 My film is predominantly a meditation on the merging of time in the mind and actions of one man. I’m not saying it’s easy, and while shooting THE SEA, (gosh was it a year ago?), down in County Wexford was the “hunting and gathering stage” (and yes, I do have a degree in social anthropology), it was in the edit that the whole notion of time came into play and how to convey its almost arbitrary meanderings and judderings, while vitally keeping the audience engaged. It wasn’t an easy task – editor Stephen O’Connell and I had to wrestle the material, and at times each other, to the ground to make sense of it all. But that, truly, was as wonderful as the shoot, even if it didn’t always feel like it at the time, because what we were doing was making sense out of the raw material which was the script placed end to end. So THE SEA was an organic project – one which could have been taken in many directions and now, I’m happy to say, I have a film which resonates and flows the way I wanted it to and how I hope it will work for you, the audience, too. It’s a subjective approach, for a subjective subject: grief.

The two films I’ve seen most recently take an entirely different approach. Richard Curtis’s MAKING TIME and Woody Allen’s BLUE JASMINE are more schematic. There is a definite plan in the way time is portrayed and they both stick slavishly to it. In a sense, both these film-makers have become parodies or perhaps slightly more generously, imitators of themselves. They “do” Richard Curtis and Woody Allen films. And, as someone who worships Allen and admires Curtis, at this point in their film-making and my film viewing (which is one of THE most active facets of my life) careers, this leads to a staleness of vision. Now I know there’s tons of column inches on all this and it’s been said in far greater depth and insight than I, but heck, I’m a fan – and, turning to BLUE JASMINE, despite the actors acting their socks off and the decor decoring its socks off, the whole is contrived, indulgent and static. The film is simply so overburdened with language, that the truth is buried under a welter of words. As for MAKING TIME, funnily enough, despite all the cognoscenti’s sneering at the formulaic nature of Curtis’s Working Title output, with whom he has become synonymous, I find the truth, for me, does escape into view! The device is merely a maguffin which allows the deeper question to emerge, which is, “how do we make the best use of the limited time we have which is our lives?”

This entry was posted in Uncategorized. Bookmark the permalink.